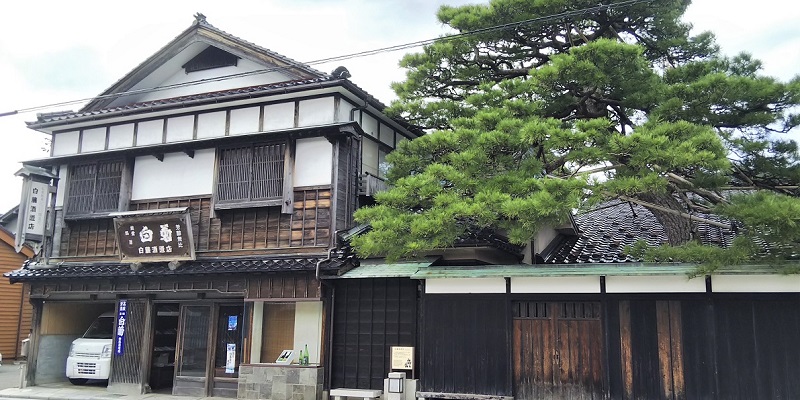 The Shirafuji Sake Brewery is located near the coast of the Sea of Japan in the Noto region, which was the first registered place in Japan as a World Agricultural Heritage site as “Satoyama and Satoumi of Noto”.
The sake brewery was founded in the middle of the 19th century.
At the time of the father of the current Toji (chief sake maker), the brewery moves into the system in which the Kuramoto (brewery president) also serves as the Toji.
Currently, the president works as Toji, and his wife is in charge of making koji. It is a family-run brewery, and several other fishermen come to help as brewery workers during the sake brewing.
Brewers of fishermen are not so many because rice farmers is general.
The brewery carefully makes about 56,000 bottles (720ml bottle) in total.
Of that amount, only about 2.5% of sake is made from “naturally cultivated rice” grown with pesticide-free and no fertilizers.
This is a precious sake.
They started brewing using naturally cultivated rice in 2017.
It happened in the wake of a request from a rice farmer.

Rice farming of natural cultivation at the World Agricultural Heritage

Rice used in sake named “Oku Noto’s Shiragiku Multiply Naturally Cultivated Rice” is cultivated in the village of Noto, a World Agricultural Heritage Site.
Arai started natural cultivation in a land surrounded by abandoned forests and small mountains 12 years ago.
He cultivates the highest grade edible Koshihikari, which is adopted and purchased directly by consumers, without using the market.
The naturally cultivated rice field coexists with the rich satoyama (countryside forest ecosystem), and many people come to visit.
In the 10th anniversary year, Arai wanted to make sake made from the rice and give it to customers and consulted with Shirafuji Sake Brewery of the city.
This led to the birth of sake made from the edible highest grade Koshihikari.
The encounter of Shirafuji Sake Brewery which makes high-quality brewing in a small amount, and the highest grade Koshihikari planted by a farmer Arai, who naturally cultivates with taking his time and effort, gave birth to the unprecedented sake.